had the privilege of working with the band Ashtonlane on their album cover and promo shots
there is nothing i like better than working with creative people fantastic fun relaxed shoot and here you can see the guys from the band got there own back on me by turning the camera on me and lets face it i have the face and body of a supermodel so i was cool with that ?
anyway thanks to the band esther,tim and jamie and to deborah for shooting this video.
also to the creative team that is Jacquie Bruin makeup and Gail Rankin hair thanks guys.
also many thanks to Dawn Martin and Anna Binning for their assistance on this shoot running about after me (and i wonder why my ass is getting bigger)
a few stills from the shoot firstly a behind the scenes shot of dawn and anna standing on a rather shaky fire exit stair lighting the band from above ahh the things a assistant has to do. 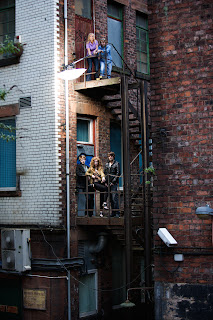 now a few shots from the shoot firstly the stairwell shot which no lighting diagram is needed as you can see how its lit from above image. 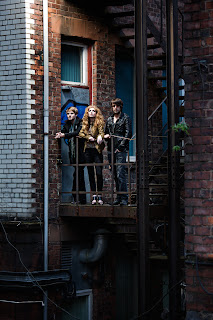 now this is the shot they are using as the album cover its a fairly straightforward studio shot using 4 lights. 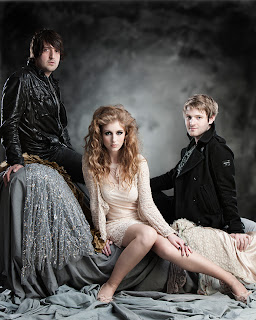 i will add a lighting diagram
Posted by stantonimaging at 07:36